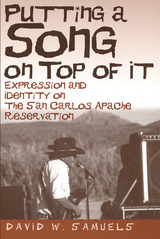 As in many Native American communities, people on the San Carlos Apache reservation in southeastern Arizona have for centuries been exposed to contradictory pressures. One set of expectations is about conversion and modernization—spiritual, linguistic, cultural, technological. Another is about steadfast perseverance in the face of this cultural onslaught. Within this contradictory context lies the question of what validates a sense of Apache identity.

For many people on the San Carlos reservation, both the traditional calls of the Mountain Spirits and the hard edge of a country, rock, or reggae song can evoke the feeling of being Apache. Using insights gained from both linguistic and musical practices in the community—as well as from his own experience playing in an Apache country band—David W. Samuels explores the complex expressive lives of these people to offer new ways of thinking about cultural identity.

Samuels analyzes how people on the reservation make productive use of popular culture forms to create and transform contemporary expressions of Apache cultural identity. As Samuels learned, some popular songs—such as those by Bob Marley—are reminiscent of history and bring about an alignment of past and present for the Apache listener. Thinking about Geronimo, for instance, might mean one thing, but “putting a song on top of it” results in a richer meaning. Samuels also proposes that the concept of the pun, as both a cultural practice and a means of analysis, helps us understand the ways in which San Carlos Apaches are able to make cultural symbols point in multiple directions at once. Through these punning, layered expressions, people on the reservation express identities that resonate with the complicated social and political history of the Apache community.

This richly detailed study challenges essentialist notions of Native American tribal and ethnic identity by revealing the turbulent complexity of everyday life on the reservation. Samuels’s work is a multifaceted exploration of the complexities of sound, of language, and of the process of constructing and articulating identity in the twenty-first century.
AUTHOR BIOGRAPHY
David W. Samuels is an assistant professor of anthropology at the University of Massachusetts at Amherst.