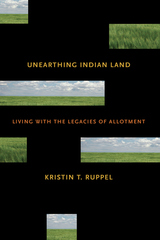 Unearthing Indian Land offers a comprehensive examination of the consequencesof more than a century of questionable public policies. In this book,Kristin Ruppel considers the complicated issues surrounding American Indianland ownership in the United States.

Under the General Allotment Act of 1887, also known as the Dawes Act,individual Indians were issued title to land allotments while so-called “surplus”Indian lands were opened to non-Indian settlement. During the forty-seven yearsthat the act remained in effect, American Indians lost an estimated 90 millionacres of land—about two-thirds of the land they had held in 1887. Worse, theloss of control over the land left to them has remained an ongoing and insidiousresult.

Unearthing Indian Land traces the complex legacies of allotment, includingnumerous instructive examples of a policy gone wrong. Aside from the initialcatastrophic land loss, the fractionated land ownership that resulted from theact’s provisions has disrupted native families and their descendants for morethan a century. With each new generation, the owners of tribal lands grow innumber and therefore own ever smaller interests in parcels of land. It is not uncommonnow to find reservation allotments co-owned by hundreds of individuals.Coupled with the federal government’s troubled trusteeship of Indian assets,this means that Indian landowners have very little control over their own lands.

Illuminated by interviews with Native American landholders, this book isessential reading for anyone who is interested in what happened as a result of thefederal government’s quasi-privatization of native lands.
TABLE OF CONTENTS