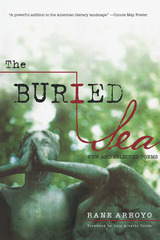 The Buried Sea: New and Selected Poems
by Rane Arroyo
foreword by Luis Alberto Urrea
University of Arizona Press, 2008
Paper: 978-0-8165-2716-8
A poem is a living library, a hospitable planet in black space, a bell waiting to wear the music of motion across stilled lands. Writers are the carriers of the voices around us. We are writers and readers in dark times when words are correctly understood as powerful weapons. —From the Introduction

Reading Rane Arroyo’s poems is a little like watching a movie playing at fastforward speed on the TV in your darkened bedroom. The colors pop and snap, the images leap and recede, the colors seem brighter than life—and you can’t stop watching even long enough to blink. It’s an intimate experience. Even at hyperspeed you can make out the images of friends, family, and lovers (especially lovers) burning rubber across the unblinking screen. And even without a sound track, you can hear the music—a symphony of jazz and samba, salsa and street sounds.

In The Buried Sea, Arroyo has selected poems from his first eleven books—five full-length collections of poems and six chapbooks—and has added nineteen new poems. When asked to describe himself, Arroyo writes that “the answer is easy: I’m a Puerto Rican, gay, Midwestern, educated, former working class, liberal, atheistic, humanist, American, male, ex-Mormon, ex-Catholic, pseudo-Buddhist, teacher, reader, global, and popular culture—informed poet.” Readers will find traces of all of these selves in this collection. And Arroyo does make it “easy” to follow the clues. His poems—vivacious, sexy, shiny, sly, pointed, ambitious—are easy to approach and easy to love. But they come with strings attached—like all affairs of the heart—and therein lies so much of their pleasure.
AUTHOR BIOGRAPHY
Rane Arroyo's previous collections include The Singing Shark, which won the Carl Sandburg Poetry Award. He is Professor of Creative Writing at the University of Toledo.
TABLE OF CONTENTS


Poeta Sin Permiso, Poemas Sin Fronteras, On the Work of Rane Arroyo: A Foreword by Luis Alberto Urrea
Introduction: Some Debts Are Angels