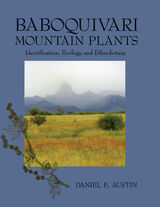 Baboquivari Mountain Plants: Identification, Ecology, and Ethnobotany
by Daniel F. Austin
University of Arizona Press, 2010
Cloth: 978-0-8165-2837-0
The Baboquivari Mountains, long considered to be a sacred space by the Tohono O’odham people who are native to the area, are the westernmost of the so-called Sky Islands. The mountains form the border between the floristic regions of Chihuahua and Sonora. This encyclopedic work describes the flora of this unique area in detail. It includes descriptions, identifications, ecology, and extensive etymologies of plant names in European and indigenous languages. Daniel Austin also describes pollination biology and seed dispersal and explains how plants in the area have been used by humans, beginning with Native Americans.

The term “sky island” was first used by Weldon Heald in 1967 to describe mountain ranges that are separated from each other by valleys of grassland or desert. The valleys create barriers to the spread of plant species in a way that is similar to the separation of islands in an ocean. The 70,000-square-mile Sky Islands region of southeastern Arizona, southwestern New Mexico, and northwestern Mexico is of particular interest to botanists because of its striking diversity of plant species and habitats. With more than 3,000 species of plants, the region offers a surprising range of tropical and temperate zones. Although others have written about the region, this is the first book to focus exclusively on the plant life of the Baboquivari Mountains.

The book offers an introduction to the history of the region, along with a discussion of human influences, and includes a useful appendix that lists all of the plants known to be growing in the Baboquivari Mountain chain.
AUTHOR BIOGRAPHY
Daniel F. Austin is an adjunct professor of plant sciences at the University of Arizona and a research associate at both the Arizona-Sonora Desert Museum in Tucson and the Desert Botanical Garden in Phoenix. He is also professor emeritus of botany at Florida Atlantic University, where he taught for more than thirty years. He is the author or co-author of many books, including Florida Ethnobotany.
TABLE OF CONTENTS