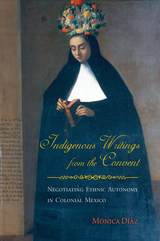 Sometime in the 1740s, Sor María Magdalena, an indigenous noblewoman living in one of only three convents in New Spain that allowed Indians to profess as nuns, sent a letter to Father Juan de Altamirano to ask for his help in getting church prelates to exclude Creole and Spanish women from convents intended for indigenous nuns only. Drawing on this and other such letters—as well as biographies, sermons, and other texts—Mónica Díaz argues that the survival of indigenous ethnic identity was effectively served by this class of noble indigenous nuns.

While colonial sources that refer to indigenous women are not scant, documents in which women emerge as agents who actively participate in shaping their own identity are rare. Looking at this minority agency—or subaltern voice—in various religious discourses exposes some central themes. It shows that an indigenous identity recast in Catholic terms was able to be effectively recorded and that the religious participation of these women at a time when indigenous parishes were increasingly secularized lent cohesion to that identity.

Indigenous Writings from the Convent examines ways in which indigenous women participated in one of the most prominent institutions in colonial times—the Catholic Church—and what they made of their experience with convent life. This book will appeal to scholars of literary criticism, women’s studies, and colonial history, and to anyone interested in the ways that class, race, and gender intersected in the colonial world.
AUTHOR BIOGRAPHY
Mónica Díaz is an assistant professor at Georgia State University, where she teaches colonial Latin American literature and culture.
TABLE OF CONTENTS

Introduction
1 Indigenous Nobility and Conventual Foundations
2 The Idea of Corpus Christi: Discursive Effects of Colonialism
3 Indigenous Women and Religious Life: Stereotype and Ambivalence
4 Biographies and Hagiographies: The Different Perspectives of Gender
5 Panegyric Sermons: Dialogic Spaces and Examples of Virtue
6 Letters from the Convent: Struggles through the Written Word
Epilogue