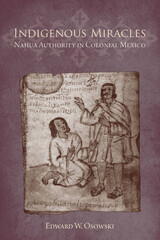 Indigenous Miracles: Nahua Authority in Colonial Mexico
by Edward W. Osowski
University of Arizona Press, 2010
Cloth: 978-0-8165-2855-4
While King Carlos I of Spain struggled to suppress the Protestant Reformation in the Old World, the Spanish turned to New Spain to promote the Catholic cause, unimpeded by the presence of the “false” Old World religions. To this end, Osowski writes, the Spanish “saw indigenous people as necessary protagonists in the anticipated triumph of the faith.” As the conversion of the indigenous people of Mexico proceeded in earnest, Catholic ritual became the medium through which indigenous leaders and Spaniards negotiated colonial hegemony.

Indigenous Miracles is about how the Nahua elite of central Mexico secured political legitimacy through the administration of public rituals centered on miraculous images of Christ the King. Osowski argues that these images were adopted as community symbols and furthermore allowed Nahua leaders to “represent their own kingship,” protecting their claims to legitimacy. This legitimacy allowed them to act collectively to prevent the loss of many aspects of their culture. Osowski demonstrates how a shared religion admitted the possibility of indigenous agency and new ethnic identities.

Consulting both Nahuatl and Spanish sources, Osowski strives to fill a gap in the history of the Nahuas from 1760 to 1810, a momentous time when previously sanctioned religious practices were condemned by the viceroys and archbishops of the Bourbon royal dynasty. His approach synthesizes ethnohistory and institutional history to create a fascinating account of how and why the Nahuas protected the practices and symbols they had appropriated under Hapsburg rule. Ultimately, Osowski’s account contributes to our understanding of the ways in which indigenous agency was negotiated in colonial Mexico.
AUTHOR BIOGRAPHY
Edward W. Osowski is a professor of history at John Abbott College in Montreal. He was awarded a Fulbright dissertation scholarship for Mexico in 1998 and co-edited Mexican History: A Primary Source Reader.
TABLE OF CONTENTS


List of Illustrations
Acknowledgments
Introduction: From Imperial Wonders to Indigenous Miracles
1 Ritual Burials at Origin Places in Chalco
2 Eighteenth-Century Remembrances of Miracles of Primordial Authority
3 Cracks in Incorruptibility and the Traveling Alms Collectors
4 Gender and the Spiritual Tax Collectors
5 Corpus Christi Arches and Authority in Mexico City
6 Triumphal Arches and Centurions in the Indigenous–Spanish Festival Economy
Conclusion: From Indigenous Miracles to Miracles of the Poor
Appendix: Order of Appearance of Corpus Christi Arches, Mexico City, 1777–1780, from Cathedral Side Door to Front Door
Notes
Glossary
Bibliography
Index