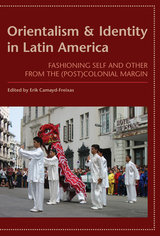 Building on the pioneering work of Edward Said in fresh and useful ways, contributors to this volume consider both historical contacts and literary influences in the formation of Latin American constructs of the “Orient” and the “Self” from colonial times to the present. In the process, they unveil wide-ranging manifestations of Orientalism. Contributors scrutinize the “other” great encounter, not with Europeans but with Arabic, Chinese, and Japanese cultures, as they marked Latin American societies from Mexico, Central America, and the Caribbean to Peru, Argentina, and Brazil. The perspectives, experiences, and theories presented in these examples offer a comprehensive framework for understanding wide-ranging manifestations of Orientalism in Latin America and elsewhere in the developing world.
Orientalism and Identity in Latin America expands current theoretical frameworks, juxtaposing historical, biographical, and literary depictions of Middle Eastern and Asian migrations, both of people and cultural elements, as they have been received, perceived, refashioned, and integrated into Latin American discourses of identity and difference. Underlying this intercultural dialogue is the hypothesis that the discourse of Orientalism and the process of Orientalization apply equally to Near Eastern and Far Eastern subjects as well as to immigrants, regardless of provenance—and indeed to any individual or group who might be construed as “Other” by a particular dominant culture.

Erik Camayd-Freixas is Professor of Hispanic Studies and Director of Graduate Studies at Florida International University. He is the author of several books and co-edited the seminal Primitivism and Identity in Latin America.