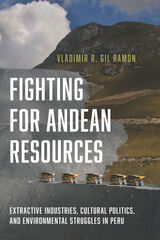 Mining investment in Peru has been presented as necessary for national progress; however, it also has brought socioenvironmental costs, left unfulfilled hopes for development, and has become a principal source of confrontation and conflict.

Fighting for Andean Resources focuses on the competing agendas for mining benefits and the battles over their impact on proximate communities in the recent expansion of the Peruvian mining frontier. The book complements renewed scrutiny of how globalization nurtures not solely antagonism but also negotiation and participation.

Having mastered an intimate knowledge of Peru, Vladimir R. Gil Ramón insightfully documents how social technologies of power are applied through social technical protocols of accountability invoked in defense of nature and vulnerable livelihoods. Although analyses point to improvements in human well-being, a political and technical debate has yet to occur in practice that would define what such improvements would be, the best way to achieve and measure them, and how to integrate dimensions such as sustainability and equity.

Many confrontations stem from frustrated expectations, environmental impacts, and the virtual absence of state apparatus in the locations where new projects emerged. This book presents a multifaceted perspective on the processes of representation, the strategies in conflicts and negotiations of development and nature management, and the underlying political actions in sites affected by mining.

Vladimir R. Gil Ramón is faculty at the Environmental Development Master’s Program and the Department of Social Sciences at the Catholic University of Peru (PUCP), as well as an adjunct associate research scientist at the Earth Institute Center for Environmental Sustainability at Columbia University.

"Fighting for Andean resources offers a highly detailed and forensically researched examination of how extraction is done at local, national and international levels; what the costs and perceived benefits are; and for whom. Peru is a superb example."—Joy Porter, International Affairs

"Gil Ramón’s book, at the corner between ethnographic study, political analysis, and advocacy concerns, makes an impressive contribution to the study of large-scale mining (LSM) and its relationship to neighbouring communities. ... This book, targeting an academic audience, is a must read for practitioners all around the globe. In a time when responsible minerals sourcing is increasingly at the fore of corporate social responsibility (CSR), Gil Ramón provides much-needed answers to key questions facing the industry."—Raphael Deberdt, Anthropological Forum

“This is an excellent case study…Another strength is the author’s mastery of legal, economic, and anthropological literatures in addition to an impressive base of primary sources and interviews…the book will find a ready audience among scholars and graduate students interested in the strategies available for defending vulnerable environments and populations.”—Mark P. Dries, Hispanic American Historical Review

“The nineteenth century Italian naturalist Antonio Raimondi described Peru as ‘abeggar sitting on a bench of gold,’ neatly summing up the inherent tension in the proximity of Indigenous peoples to rich natural resources. When neoliberal reforms stimulated a mining boom in Peru beginning in the 1990s, its Indigenous people came under great pressure to ‘get off the bench.’ In Fighting for Andean Resources, Vladimir R. Gil Ramón problematizes that framing of Peru’s development challenge, but he does not replace it with a simplistic analysis of relations between multinational corporations, the state, and its Indigenous citizens. Instead, his eloquent study, long in the making, asks, What is development, and from whose perspective?—acknowledging that its subjects, and its victims, may surprise us with their own answers. Fighting for Andean Resources will join the celebrated ranks of works on Andean mining that have contributed not only to our understanding of this critical resource sector but also to wider questions of anthropological theory and practice.”—Michael R. Dove, Yale University

“Vladimir Gil Ramón has crafted a richly detailed study of Peruvian involuntary mining-induced resettlement of Indigenous Andean communities that does more than address the question of who pays the price. This is a well-supported ethnographic history of one the largest copper-zinc mines in the world. It offers dynamic insight into how and why powerless communities organize, confront and assert concerns, and negotiate. In so doing, he makes visible that which has been long denied: citizenship. This nuanced ‘deep ethnography’ is a must-read for students, scholars, and advocates!”—Barbara Rose Johnston, Center for Political Ecology

“The author not only shows how conflicts emerge and why and how they take the forms they do but also gives a theoretically sophisticated view of the relationship between ‘citizenship,’ broadly conceived, and conflicts over extractivism, noting that citizenship is not best seen as a prior condition to mining conflicts but as one that comes to be and takes its shape through such conflicts.”—Elizabeth Ferry, author of Not Ours Alone: Patrimony, Value, and Collectivity in Contemporary Mexico

“The extraction of minerals from developing countries by international companies has been a source of controversy for many years. Many authors have noted that the expected economic gains often fail to materialize. Additionally, there is frequently a high social and environmental cost to pay for the mining activities. Vladimir Gil Ramón gives us a singularly illuminating study of the development of the Antamina mining project, a project supported by the World Bank conditional on the observance of relatively strict social and environmental standards. We learn a great deal about the roles of government, local community, NGO and corporation, as well as the impact of the multilateral development agencies. Gil Ramón’s work contributes important ideas to our thinking about how mining projects should be managed.”—Geoffrey Heal, author of Endangered Economies: How the Neglect of Nature Threatens Our Prosperity

TABLE OF CONTENTS
Cover
Title page
Copyright
Dedication
Contents
List of Illustrations
Foreword by Enrique Mayer
Acknowledgments
Introduction: The Struggle for Andean Rocks
1. Mining Apparatus
2. From “Involuntary Resettlement” to Displacement
3. A Pipeline to Save a National Park: Participation in the Environmental Impact Assessment
4. From Roads to Coliseums: The Long and Winding Road of Development Myths
5. “Dear Engineer, Could You Explain to My Donkey That This Cloudy Water with a Bad Smell Is Clean?”: The Politics of Pollution and Environmental Risk
Conclusion: Reassessing Stratagems, Struggles, and Citizenship
Abbreviations
Notes
References
Index
About the Author