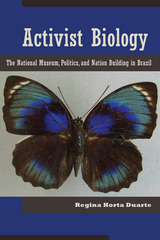 Brazilian society was shaken by turmoil in the 1920s and 1930s. The country was rocked by heated debates over race and immigration, burgeoning social movements in cities and the countryside, entrenched oligarchies clinging to power, and nature being despoiled. Against this turbulent backdrop, a group of biology scholars at the National Museum in Rio de Janeiro joined the drive to renew the Brazilian nation, claiming as their weapon the voice of their fledgling field. Without discarding scientific rigor, they embraced biology as a creed and activism as a conviction—and achieved success in their bid to influence public policy in environmental protection and the rational use of natural resources.

For the first time in English, Brazil’s leading environmental historian, Regina Horta Duarte, brings us a nuanced analysis of the National Museum of Brazil’s contribution to that country’s formation and history. In Activist Biology, Duarte explores the careers of three of these scientists as they leveraged biology as a strategy for change. Devoted to educational initiatives, they organized exhibits, promoted educational film and radio, wrote books, published science communication magazines, fostered school museums, and authored textbooks for young people. Their approach was transdisciplinary, and their reliance on multimedia formats was pioneering.

Capturing a crucial period in Brazil’s history, this portrait of science as a creative and potentially transformative pathway will intrigue anyone fascinated by environmental history, museums, and the history of science. Duarte skillfully shows how Brazilian science furthered global scientific knowledge in ways that are relevant now more than ever.
AUTHOR BIOGRAPHY
Regina Horta Duarte is a professor of history at the Universidade Federal de Minas Gerais, Brazil. She is the author of several books, including Noites Circenses: Espetáculos de circo e teatro em Minas Gerais no século XIX and História e Natureza. She is a founding member of the Sociedad Latinoamericana y Caribeña de Historia Ambiental, and she was the founding editor-in-chief of the journal Historia Ambiental Latinoamericana y Caribeña.