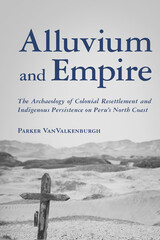 Alluvium and Empire uncovers the stories of Indigenous people who were subject to one of the largest waves of forced resettlement in human history, the Reducción General. In 1569, Spanish administrators attempted to move at least 1.4 million Indigenous people into a series of planned towns called reducciones, with the goal of reshaping their households, communities, and religious practices. However, in northern Peru’s Zaña Valley, this process failed to go as the Spanish had planned. In Alluvium and Empire, Parker VanValkenburgh explores both the short-term processes and long-term legacies of Indigenous resettlement in this region, drawing particular attention to the formation of complex relationships between Indigenous communities, imperial institutions, and the dynamic environments of Peru’s north coast.

The volume draws on nearly ten years of field and archival research to craft a nuanced account of the Reducción General and its aftermath. Written at the intersections of history and archaeology, Alluvium and Empire at once bears witness to the violence of Spanish colonization and highlights Indigenous resilience in the aftermath of resettlement. In the process, VanValkenburgh critiques previous approaches to the study of empire and models a genealogical approach that attends to the open-ended—and often unpredictable—ways in which empires take shape.
AUTHOR BIOGRAPHY

Parker VanValkenburgh is Stanley J. Bernstein Assistant Professor of Social Sciences in the Department of Anthropology at Brown University. He has co-edited the volumes Arqueología Histórica en el Peru and Territoriality in Archaeology.

TABLE OF CONTENTS
Contents
List of Illustrations
Acknowledgments
Introduction
1. Studying Empire, Genealogically
2. The Development of Reducción
3. Environment, Settlement, and Indigenous Political Subjectivity in Zaña Before the Reducción General
4. How Reducción Worked: Indigenous Resettlement and Regional Transformation in the Zaña Valley During the Late Sixteenth Century
5. After-Affects: The Transformation and Persistence of Indigenous Communities and Reducción in the Seventeenth and Eighteenth Centuries
Conclusion
Appendix: Methodological Essay
Archival Abbreviations
Notes
References
Index