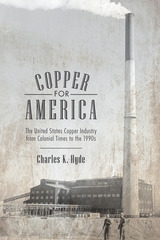 This comprehensive history of copper mining tells the full story of the industry that produces one of America's most important metals. The first inclusive account of U.S. copper in one volume, Copper for America relates the discovery and development of America's major copper-producing areas—the eastern United States, Tennessee, Michigan, Montana, Arizona, New Mexico, Nevada, Utah, and Alaska—from colonial times to the present.

Starting with the predominance of New England and the Middle Atlantic states in the early nineteenth century, Copper for America traces the industry's migration to Michigan in mid-century and to Montana, Arizona, and other western states in the late nineteenth century. The book also examines the U.S. copper industry's decline in the twentieth century, studying the effects of strong competition from foreign copper industries and unforeseen changes in the national and global copper markets.

An extensively documented chronicle of the rise and fall of individual mines, companies, and regions, Copper for America will prove an essential resource for economic and business historians, historians of technology and mining, and western historians.
AUTHOR BIOGRAPHY
Charles K. Hyde is a professor of history at Wayne State University and the author of several books, including Technological Change and the British Iron Industry, 1700-1870, The Northern Lights: Lighthouses of the Upper Great Lakes, and Historic Highway Bridges of Michigan.