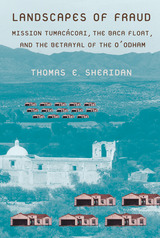 From the actions of Europeans in the seventeenth century to the real estate deals of the modern era, people making a living off the land in southern Arizona have been repeatedly robbed of their way of life. History has recorded more than three centuries of speculative failures that never amounted to much but left dispossessed people in their wake. This book seeks to excavate those failures, to examine the new social spaces the schemers struggled to create and the existing social spaces they destroyed.

Landscapes of Fraud explores how the penetration of the evolving capitalist world-system created and destroyed communities in the Upper Santa Cruz Valley of Arizona from the late 1600s to the 1970s. Thomas Sheridan has melded history, anthropology, and critical geography to create a penetrating view of greed and power and their lasting effect on those left powerless.

Sheridan first examines how O’odham culture was fragmented by the arrival of the Spanish, telling how autonomous communities moving across landscapes in seasonal rounds were reduced to a mission world of subordination. Sheridan then considers the fate of the Tumacácori grant and Baca Float No. 3, another land grant. He tells the unbroken story of land fraud from Manuel María Gándara’s purchase of the “abandoned” Tumacácori grant at public auction in 1844 through the bankruptcy of the shady real estate developers who had fraudulently promoted housing projects at Rio Rico during the 1960s and ’70s.

As the Upper Santa Cruz Valley underwent a wrenching transition from a landscape of community to a landscape of fraud, the betrayal of the O’odham became complete when land, that most elemental form of human space, was transformed from a communal resource into a commodity bought and sold for its future value. Today, Mission Tumacácori stands as a romantic icon of the past while the landscapes that supported it lay buried under speculative schemes that continue to haunt our history.
AUTHOR BIOGRAPHY
Thomas E. Sheridan holds a joint appointment as professor of Anthropology at the Southwest Center and the Department of Anthropology at the University of Arizona. He has authored or co-edited eleven other books.
TABLE OF CONTENTS