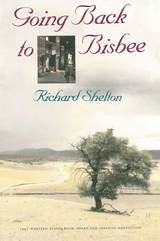 One of America's most distinguished poets now shares his fascination with a distinctive corner of our country. Richard Shelton first came to southeastern Arizona in the 1950s as a soldier stationed at Fort Huachuca. He soon fell in love with the region and upon his discharge found a job as a schoolteacher in nearby Bisbee. Now a university professor and respected poet living in Tucson, still in love with the Southwestern deserts, Shelton sets off for Bisbee on a not-uncommon day trip. Along the way, he reflects on the history of the area, on the beauty of the landscape, and on his own life.

Couched within the narrative of his journey are passages revealing Shelton's deep familiarity with the region's natural and human history. Whether conveying the mystique of tarantulas or describing the mountain-studded topography, he brings a poet's eye to this seemingly desolate country. His observations on human habitation touch on Tombstone, "the town too tough to die," on ghost towns that perhaps weren't as tough, and on Bisbee itself, a once prosperous mining town now an outpost for the arts and a destination for tourists. What he finds there is both a broad view of his past and a glimpse of that city's possible future.