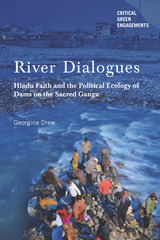 India’s sacred Ganga River is arguably one of the most iconic sites for worship, with a continuity of rituals for the living and the dead that span over two millennia. Along the river, from high in the Himalaya to the vast plains below, people gather daily to worship the Ganga through prayer and song. But large government-sponsored dams threaten to upend these practices.

In River Dialogues, Georgina Drew offers a detailed ethnographic engagement with the social movements contesting hydroelectric development on the Ganga. The book examines the complexity of the cultural politics that, on the one hand, succeeded in influencing an unprecedented reversal of government plans for three contested hydroelectric projects, and how, on the other hand, this decision sparked ripples of discontent after being paired with the declaration of a conservation zone where the projects were situated.

The book follows the work of women who were initially involved in efforts to stop the disputed projects. After looking to their discourses and actions, Drew argues for the use of a political ecology analysis that incorporates the everyday practice and everyday religious connections that animated the cultural politics of development. Drew offers a nuanced understanding of the struggles that communities enact to assert their ways of knowing and caring for resources that serves as an example for others critically engaging with the growing global advocacy of the “green economy” model for environmental stewardship.

Georgina Drew is an assistant professor in the Department of Anthropology and Development Studies at the University of Adelaide. She has been widely published in scholarly outlets, including American Anthropologist, Journal for the Study of Religion, Nature and Culture, and South Asia.