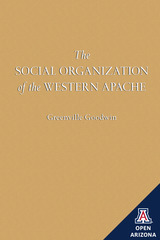 The Social Organization of the Western Apache is still one of the most comprehensive descriptions of the social life of an American Indian tribe. Grenville Goodwin knew the Western Apache better than any other ethnographer who ever lived. And he wrote about them from the conviction that his knowledge was important—not only for specialists interested in the tribes of the Southwest, but for all anthropologists concerned with the structure and operation of primitive social systems.
TABLE OF CONTENTS