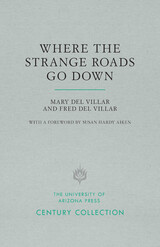 Where the Strange Roads Go Down
by Mary del Villar and Fred del Villar
foreword by Susan Hardy Aiken
University of Arizona Press, 1991
Paper: 978-0-8165-3573-6
“Strange Roads is a small gem of travel literature in the tradition of works by John Van Dyke, Carl Lumholtz, Charles Lummus, Mary Austin, Edward Hoagland, and Bruce Chatwin. But for all its absorbing detail about topography, flora, and fauna, its keen observations of character, and its vivid re-creation of the sense of place, it is much more than a travel memoir. For on every page one senses the strength, character, and distinctive perspective of Mary del Villar herself. An uncommon woman by any standards, she seems all the more remarkable when one recalls the profoundly reactionary gender ideologies that prevailed in the postwar era in which she lived and wrote. Like other great female wanderers, she transcended the confining notions of woman her society would have imposed on her, living her life according to the dictates of her own intrepid spirit.” –From the foreword by Susan Hardy Aiken