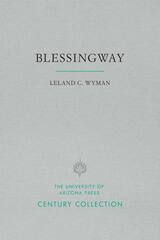 Blessingway: With Three Versions of the Myth Recorded and Translated from the Navajo by Father Berard Haile, O.F.M.
by Leland C. Wyman
contributions by Berard Haile
foreword by Bernard L. Fontana

An outstanding work crafted from the handwritten pages of translations from the Navajo of the late Father Berard Haile giving three separate versions of the Blessingway rite with each version consisting of a prose text accompanied by the ritual songs and prayers. Valuable insights into the character and use of the Blessingway rite; its ceremonial procedures, its mythology, and its drypaintings.
AUTHOR BIOGRAPHY
Leland C. Wyman, an outstanding authority on Navajo religion, extended the research of his scholarship from his primary field of physiology to anthropology and art, folklore, and folk literature. Wyman, a Ph.D., in Biology from Harvard, taught and did research in physiology at Boston University for four decades, meanwhile engaging in many cross-disciplinary projects. In the early 1930s he began to write on Navajo ceremonialism and mythology, and soon teamed up with anthropologists and other specialists to publish on Navajo medicine, ethnobotany, ethnoentomology, psychology, and art.