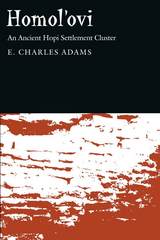 Beginning sometime in the thirteenth century, people from the Hopi Mesas established a cluster of villages to the south along the Little Colorado River. They were attracted by the river’s resources and the region’s ideal conditions for growing cotton. By the late 1300s, these Homol’ovi villages were the center of a robust trade in cotton among many clusters of villages near or on the southern Colorado Plateau and were involved in the beginning of the katsina religion among Hopi people.

Charles Adams has directed fifteen years of research at these sites for the Arizona State Museum, including excavations in five of the seven primary Homol'ovi villages and in other villages predating them. Through this research he concludes that the founders of these settlements were Hopis who sought to protect their territory from migrating groups elsewhere in the Pueblo world. This book summarizes that research and broadens our understanding of the relationship of Homol'ovi to ancient and modern Hopi people.

Each Homol'ovi village had a unique history of establishment, growth, sociopolitical organization, length of occupation, and abandonment; and although the villages shared much in the way of material culture, their size and configuration were tremendously varied. By comparing Homol'ovi research to information from projects on other settlements in the area, Adams has been able to reconstruct a provocative history of the Homol'ovi cluster that includes relationships among the individual villages and their relationships to nearby clusters. He shows that social organization within villages is apparent by the number and variety of ritual structures, while political organization among villages is indicated by the need for cooperation to share water for irrigation and by the exchange of such materials as pottery, obsidian, and ground stone.

Adams advances several important theories about why Homol'ovi was founded where and when it was, who its founders were, and the importance of cotton in making Homol'ovi an important center of trade in the 1300s. He also considers why Pueblo settlements suddenly became so large, addressing theoretical issues pertaining to multiple settlements and the rise of enormous villages containing more than 1,000 rooms.

Homol'ovi is a rich work of synthesis and interpretation that will be important for anyone with an interest in Southwest archaeology, Arizona history, or Hopi culture. By considering the settlement trajectory of an entire cluster of sites, it will also prove valuable to archaeologists worldwide.
AUTHOR BIOGRAPHY
E. Charles Adams has directed the Homol'ovi Research Program at the Arizona State Museum since 1985. In addition to his book The Origin and Development of the Pueblo Katsina Cult, he has also published three edited monographs on the research at Homol'ovi.
TABLE OF CONTENTS
Contents
List of Figures
List of Tables
Preface
1. The Homol'ovi Cluster
2. Methodology
3. The Physical Environment
4. Chronology
5. The Cultural Context before Migration
6. Aggregation
7. Relations within the Homol'ovi Cluster
8. Relations between the Homol'ovi Cluster and Adjacent Clusters
9. The Evolution of the Homol'ovi Cluster
10. Conclusions
References Cited
Index