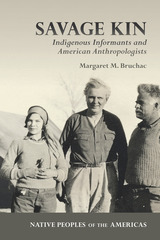 This book reconceptualizes the intimate details of encounters with Native interlocutors who by turns inspired, facilitated, and resisted the anthropological enterprise. Like other texts focused on this era, Savage Kin features some of the elite white men credited with salvaging material that might otherwise have been lost. Unlike other texts, this book highlights the intellectual contributions and cultural strategies of unsung Indigenous informants without whom this research could never have taken place.