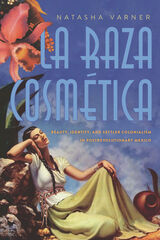 In the decades following the Mexican Revolution, nation builders, artists, and intellectuals manufactured ideologies that continue to give shape to popular understandings of indigeneity and mestizaje today. Postrevolutionary identity tropes emerged as part of broader efforts to reunify the nation and solve pressing social concerns, including what was posited in the racist rhetoric of the time as the “Indian problem.” Through a complex alchemy of appropriation and erasure, indigeneity was idealized as a relic of the past while mestizaje was positioned as the race of the future. This period of identity formation coincided with a boom in technology that introduced a sudden proliferation of images on the streets and in homes: there were more photographs in newspapers, movie houses cropped up across the country, and printing houses mass-produced calendar art and postcards. La Raza Cosmética traces postrevolutionary identity ideals and debates as they were dispersed to the greater public through emerging visual culture.

Critically examining beauty pageants, cinema, tourism propaganda, photography, murals, and more, Natasha Varner shows how postrevolutionary understandings of mexicanidad were fundamentally structured by legacies of colonialism, as well as shifting ideas about race, place, and gender. This interdisciplinary study smartly weaves together cultural history, Indigenous and settler colonial studies, film and popular culture analysis, and environmental and urban history. It also traces a range of Indigenous interventions in order to disrupt top-down understandings of national identity construction and to “people” this history with voices that have all too often been entirely ignored.
AUTHOR BIOGRAPHY
Natasha Varner, PhD, is a writer and historian whose work focuses on race, identity, and settler colonialism in Mexico and the United States. She is the recipient of the 2017 Lewis Hanke postdoctoral research award presented by the Conference on Latin American History. In addition to traditional academic pursuits, she is a public scholar who has written for Public Radio International and Jacobin, among other outlets.
TABLE OF CONTENTS