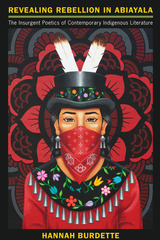 From the rise of the Pan-Maya Movement in Guatemala and the Zapatista uprising in Mexico to the Water and Gas Wars in Bolivia and the Idle No More movement in Canada, the turn of the twenty-first century has witnessed a notable surge in Indigenous political action as well as an outpouring of texts produced by Native authors and poets. Throughout the Americas—Abiayala, or the “Land of Plenitude and Maturity” in the Guna language of Panama—Indigenous people are raising their voices and reclaiming the right to represent themselves in politics as well as in creative writing.

Revealing Rebellion in Abiayala explores the intersections between Indigenous literature and social movements over the past thirty years through the lens of insurgent poetics. Author Hannah Burdette is interested in how Indigenous literature and social movements are intertwined and why these phenomena arise almost simultaneously in disparate contexts across the Americas.

Literature constitutes a key weapon in political struggles as it provides a means to render subjugated knowledge visible and to envision alternatives to modernity and coloniality. The surge in Indigenous literature and social movements is arguably one of the most significant occurrences of the twenty-first century, and yet it remains understudied. Revealing Rebellion in Abiayala bridges that gap by using the concept of Abiayala as a powerful starting point for rethinking inter-American studies through the lens of Indigenous sovereignty.
AUTHOR BIOGRAPHY
Hannah Burdette is an assistant professor of Spanish and Latin American studies at California State University, Chico.
REVIEWS
"(This) book offers an important introduction and nuanced analyses to some of the most prominent Indigenous literary voices across diverse geopolitical fields."—Emil' Keme, Native American and Indigenous Studies

“An ambitious and masterful comparative study. Burdette proposes a new and original theoretical framework to understand contemporary indigenous literature in relation to social movements.”—Kelly S. McDonough, Department of Spanish and Portuguese, University of Texas at Austin

“Scholars of Latin American cultural studies have been waiting for this book. Its theoretical framework and hemispheric approach are especially welcome.” —Ulises Juan Zevallos-Aguilar, Department of Spanish and Portuguese, Ohio State University


Acknowledgments
Note to the Reader

PART I. VISIBILIZAR
1. Native (In)visibility and the Narrative Refusal to Write
2. Verbal Art and the Insurrection of Maya Knowledge

Conclusion: Addicted to the Indigenous?