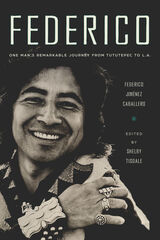 From the day he was born, Federico Jiménez Caballero was predicted to be a successful man. So, how exactly did a young boy from Tututepec, Oaxaca, become a famous Indigenous jewelry artist and philanthropist in Los Angeles? Federico tells the remarkable story of willpower, curiosity, hard work, and passion coming together to change one man’s life forever.

As a child growing up in a small rural town in southern Mexico, Federico Jiménez Caballero faced challenges that most of us cannot imagine, let alone overcome. From a young age, Federico worked tirelessly to contribute to his large family, yet his restless spirit often got him into trouble. Finding himself in the middle of a village-wide catastrophe, he was exiled to a boarding school in Oaxaca City where he was forced to become independent, resilient, and razor-sharp in order to stay afloat. Through his incredible people skills, bravery, and a few nudges from his bold mother, Federico found himself excelling in his studies and climbing the ranks in Oaxaca City. He always held a deep love and respect for his Mixtec Indigenous roots and began to collect Indigenous jewelry and textiles. Through a series of well-timed connections, Federico met his wife Ellen, and, shortly afterward, he came to the United States as a researcher at the University of California, Los Angeles, in the late 1960s.

Carrying his passion for Indigenous jewelry with him from Oaxaca, Federico owned a series of shops in Los Angeles and sold jewelry at flea markets to well-known Hollywood stars. Over the years, he cultivated relationships and became a philanthropist as well as the owner of a museum in Oaxaca City. This book is the inspiring first-person account of eighty years in the life of a man who moved from humble beginnings to the bright lights of Hollywood, following his passion and creating long-lasting relationships as he climbed the ladder of success.

Federico Jiménez Caballero is of Indigenous Mixtec and mestizo heritage from Tututepec, a small town in coastal Oaxaca, Mexico. He came to the United States as a researcher at the University of California, Los Angeles, in the late 1960s. Over the years he became a well-known and successful jewelry artist and gallery owner in Santa Monica, California. As a philanthropist, he serves on museum and nonprofit boards, and he has opened a museum in Oaxaca.

Shelby Tisdale is the director of the Center of Southwest Studies at Fort Lewis College and an award-winning author. Her book Fine Indian Jewelry of the Southwest: The Millicent Rogers Museum Collection received two awards. Her latest book, Pablita Valarde: In Her Own Words, is a full-length biography of a famous American Indian painter.