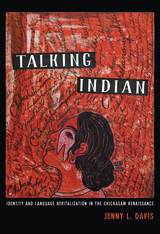 Winner of the Beatrice Medicine Award

In south-central Oklahoma and much of “Indian Country,” using an Indigenous language is colloquially referred to as “talking Indian.” Among older Chickasaw community members, the phrase is used more often than the name of the specific language, Chikashshanompa’ or Chickasaw. As author Jenny L. Davis explains, this colloquialism reflects the strong connections between languages and both individual and communal identities when talking as an Indian is intimately tied up with the heritage language(s) of the community, even as the number of speakers declines.

Today a tribe of more than sixty thousand members, the Chickasaw Nation was one of the Native nations removed from their homelands to Oklahoma between 1837 and 1838. According to Davis, the Chickasaw’s dispersion from their lands contributed to their disconnection from their language over time: by 2010 the number of Chickasaw speakers had radically declined to fewer than seventy-five speakers.

In Talking Indian, Davis—a member of the Chickasaw Nation—offers the first book-length ethnography of language revitalization in a U.S. tribe removed from its homelands. She shows how in the case of the Chickasaw Nation, language programs are intertwined with economic growth that dramatically reshape the social realities within the tribe. She explains how this economic expansion allows the tribe to fund various language-­learning forums, with the additional benefit of creating well-paid and socially significant roles for Chickasaw speakers. Davis also illustrates how language revitalization efforts are impacted by the growing trend of tribal citizens relocating back to the Nation.
AUTHOR BIOGRAPHY
Jenny L. Davis is a citizen of the Chickasaw Nation and an assistant professor of anthropology at the University of Illinois at Urbana–Champaign, where she is also the director of the Native American and Indigenous Languages (NAIL) Lab and affiliated faculty in the American Indian Studies and Gender and Women’s Studies Departments. Her co-edited volume Queer Excursions: Retheorizing Binaries in Language, Gender, and Sexuality won the Association for Queer Anthropology’s Ruth Benedict Prize in 2014.
TABLE OF CONTENTS