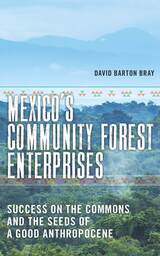 The road to sustainable forest management and stewardship has been debated for decades. Some advocate for governmental control and oversight. Some say that the only way to stem the tide of deforestation is to place as many tracts as possible under strict protection. Caught in the middle of this debate, forest inhabitants of the developing world struggle to balance the extraction of precarious livelihoods from forests while responding to increasing pressures from national governments, international institutions, and their own perceptions of environmental decline to protect biodiversity, restore forests, and mitigate climate change.

Mexico presents a unique case in which much of the nation’s forests were placed as commons in the hands of communities, who, with state support and their own entrepreneurial vigor, created community forest enterprises (CFEs). David Barton Bray, who has spent more than thirty years engaged with and researching Mexican community forestry, shows that this reform has transformed forest management in that country at a scale and level of maturity unmatched anywhere else in the world.

For decades Mexico has been conducting a de facto large-scale experiment in the design of a national social-ecological system (SES) focused on community forests. What happens when you give subsistence communities rights over forests, as well as training, organizational support, equipment, and financial capital? Do the communities destroy the forest in the name of economic development, or do they manage them sustainably, generating current income while maintaining intergenerational value as a resource for their children? Bray shares the scientific and social evidence that can now begin to answer these questions. This is an invaluable resource for students, researchers, and the interested public on the future of global forest resilience and the possibilities for a good Anthropocene.
AUTHOR BIOGRAPHY
David Barton Bray is a professor in the Earth and Environment Department at Florida International University. He received his PhD from Brown University in 1983. He is the lead editor of the book The Community Forests of Mexico and is widely published in academic journals and in popular outlets such as the New York Times and the Miami Herald.
TABLE OF CONTENTS
Cover
Title Page
Copyright
Contents
List of Illustrations
Acknowledgments
Abbreviations
1. State Policy, Markets, Community, and the Seeds of a Good Anthropocene
2. The Origins of Mexican Community Forestry: Facilitative Political Regimes and Community Collective Action
3. The Consolidation of Community- Led Community Forestry: 1988–2018
4. The Large Shadow of Community: Varieties of Experiences in Mexican CFEs
5. The Permanent Tension: Forms of CFE Self-Organization and Community and State Failure
6. Markets and the Economics of Mexican Community Forest Enterprises / with Juan Manuel Torres-Rojo
7. Putting the Ecology in the Social-Ecological System
8. Mexican Community Forests in the Anthropocene: Forest Resilience and Climate Change
References
Index
About the Author