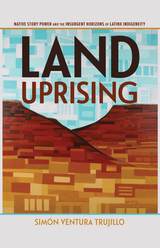 Trujillo situates his inquiry in the cultural production of La Alianza Federal de Mercedes, a formative yet understudied organization of the Chicanx movement of the 1960s and 1970s. La Alianza sought to recover Mexican and Spanish land grants in New Mexico that had been dispossessed after the Mexican-American War. During graduate school, Trujillo realized that his grandparents were activists in La Alianza. Written in response to this discovery, Land Uprising bridges La Alianza’s insurgency and New Mexican land grant struggles to the writings of Leslie Marmon Silko, Ana Castillo, Simon Ortiz, and the Zapatista Uprising in Chiapas, Mexico. In doing so, the book reveals uncanny connections between Chicanx, Latinx, Latin American, and Native American and Indigenous studies to grapple with Native land reclamation as the future horizon for Chicanx and Latinx indigeneities.
AUTHOR BIOGRAPHY

Simón Ventura Trujillo is an assistant professor of Latinx studies in the Department of English at New York University. His research and teaching dwell on the intersections between Chicanx and Indigenous literary and cultural studies within broader matrices of U.S. multiethnic literatures. His work has appeared in journals such as Aztlán: A Journal of Chicano Studiesand the Journal of Critical Ethnic Studies.

Prologue: The Long, Wondrous Life of Ventura Chávez, 1926–2013
Introduction: Insurgent Horizons
1. Revolt Is a Story, Not an Event: Anticapitalism and Pueblo Indian Endurance
2. The Mexican-American War Has Never Ended: Escape Stories and the Genízarx Diaspora in New Mexico
3. The Cricket and the Lion: The Experimental History of Indohispanx Mestizaje
4. Remember the Women Who Did the Building: Land Grant Cooperativity and the Folk Base of Chicana Feminism
5. Between the Word and the Land: Zapatismo as a Quantum Theory of Indigenous Rebellion
Coda: Secrets, Scribes, and Secretaries