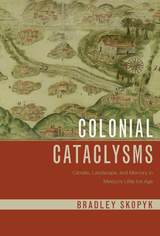 The contiguous river basins that flowed in Tlaxcala and San Juan Teotihuacan formed part of the agricultural heart of central Mexico. As the colonial project rose to a crescendo in the sixteenth and seventeenth centuries, the Indigenous farmers of central Mexico faced long-term problems standard historical treatments had attributed to drought and soil degradation set off by Old World agriculture. Instead, Bradley Skopyk argues that a global climate event called the Little Ice Age brought cold temperatures and elevated rainfall to the watersheds of Tlaxcala and Teotihuacan. With the climatic shift came cataclysmic changes: great floods, human adaptations to these deluges, and then silted wetlands and massive soil erosion.

This book chases water and soil across the colonial Mexican landscape, through the fields and towns of New Spain’s Native subjects, and in and out of some of the strongest climate anomalies of the last thousand or more years. The pursuit identifies and explains the making of two unique ecological crises, the product of the interplay between climatic and anthropogenic processes. It charts how Native farmers responded to the challenges posed by these ecological rifts with creative use of plants and animals from the Old and New Worlds, environmental engineering, and conflict within and beyond the courts. With a new reading of the colonial climate and by paying close attention to land, water, and agrarian ecologies forged by farmers, Skopyk argues that colonial cataclysms—forged during a critical conjuncture of truly unprecedented proportions, a crucible of human and natural forces—unhinged the customary ways in which humans organized, thought about, and used the Mexican environment.

This book inserts climate, earth, water, and ecology as significant forces shaping colonial affairs and challenges us to rethink both the environmental consequences of Spanish imperialism and the role of Indigenous peoples in shaping them.

Bradley Skopyk is an assistant professor in the Department of History at Binghamton University. His dissertation won prizes from the American Society of Environmental History and the Canadian Association of Latin American and Caribbean Studies.