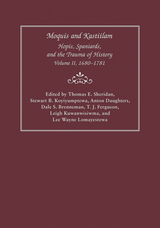 The second in a two-volume series, Moquis and Kastiilam, Volume II, 1680–1781 continues the story of the encounter between the Hopis, who the Spaniards called Moquis, and the Spaniards, who the Hopis called Kastiilam, from the Pueblo Revolt in 1680 through the Spanish expeditions in search of a land route to Alta California until about 1781. By comparing and contrasting Spanish documents with Hopi oral traditions, the editors present a balanced presentation of a shared past. Translations of sixteenth-, seventeenth-, and eighteenth-century documents written by Spanish explorers, colonial officials, and Franciscan missionaries tell the perspectives of the European visitors, and oral traditions recounted by Hopi elders reveal the Indigenous experience.

The editors argue that only the Hopi perspective can balance the story recounted in the Spanish documentary record, which is biased, distorted, and incomplete (as is the documentary record of any European or Euro-American colonial power). The only hope of correcting those weaknesses and the enormous silences about the Hopi responses to Spanish missionization and colonization is to record and analyze Hopi oral traditions, which have been passed down from generation to generation since 1540, and to give voice to Hopi values and social memories of what was a traumatic period in their past.

Volume I documented Spanish abuses during missionization, which the editors address specifically and directly as the sexual exploitation of Hopi women, suppression of Hopi ceremonies, and forced labor of Hopi men and women. These abuses drove Hopis to the breaking point, inspiring a Hopi revitalization that led them to participate in the Pueblo Revolt and to rebuff all subsequent efforts to reestablish Franciscan missions and Spanish control. Volume II portrays the Hopi struggle to remain independent at its most effective—a mixture of diplomacy, negotiation, evasion, and armed resistance. Nonetheless, the abuses of Franciscan missionaries, the bloodshed of the Pueblo Revolt, and the subsequent destruction of the Hopi community of Awat’ovi on Antelope Mesa remain historical traumas that still wound Hopi society today.

Stewart B. Koyiyumptewa received his BA from the University of Arizona in 1999. He is Program Manager for the Hopi Cultural Preservation Office.

Anton Daughters is an assistant professor of anthropology at Truman State University. He received his PhD from the University of Arizona in 2010 and was an Andrew W. Mellon Postdoctoral Fellow at Cornell College from 2010 to 2012.

Dale S. Brenneman is associate curator of documentary history in the Office of Enthohistorical Research at the Arizona State Museum. She received her PhD in anthropology from the University of Arizona in 2004.

Leigh Kuwanwisiwma is the director of the Hopi Cultural Preservation Office. He is a member of the Hopi Tribe and the Greasewood Clan. He has served on the Arizona Archaeology Commission, the Museum of Northern Arizona Board of Trustees, the Tribal Advisory Team of the Arizona State Museum, and the Museum of Indian Arts and Culture.

Lee Wayne Lomayestewa, research assistant for the Hopi Cultural Preservation Office, is an enrolled member of the Hopi Tribe and a member of the Bear Clan from the village of Songopavi in Second Mesa, Arizona. He served as president of the Southwest Native Nations Advisory Board at the University of Arizona’s Arizona State Museum and is a member of the Indian Advisory Panel at the Museum of Indian Arts & Culture, Santa Fe, New Mexico.