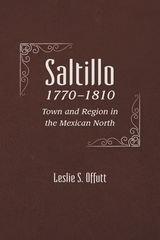 At the end of the eighteenth century, the community of Saltillo in northeastern Mexico was a thriving hub of commerce. Over the previous hundred years its population had doubled to 11,000, and the town was no longer limited to a peripheral role in the country's economy. Leslie Offutt examines the social and economic history of this major late-colonial trading center to cast new light on our understanding of Mexico's regional history. Drawing on a vast amount of original research, Offutt contends that northern Mexico in general has too often been misportrayed as a backwater frontier region, and she shows how Saltillo assumed a significance that set it apart from other towns in the northern reaches of New Spain. Saltillo was home to a richly textured society that stands in sharp contrast to images portrayed in earlier scholarship, and Offutt examines two of its most important socioeconomic groups—merchants and landowners—to reveal the complexity and vitality of the region's agriculture, ranching, and trade. By delineating the business transactions, social links, and political interaction between these groups, she shows how leading merchants came to dominate the larger society and helped establish the centrality of the town. She also examines the local political sphere and the social basis of officeholding—in which merchants generally held higher-status posts—and shows that, unlike other areas of late colonial Mexico, Saltillo witnessed little conflict between creoles and peninsulars. The growing significance of this town and region exemplifies the increasing complexity of Mexico's social, economic, and political landscape in the late colonial era, and it anticipates the phenomenon of regionalism that has characterized the nation since Independence. Offutt's study reassesses traditional assumptions regarding the social and economic marginality of this trading center, and it offers scholars of Mexican and borderlands studies alike a new way of looking at this important region.
AUTHOR BIOGRAPHY
Leslie Offutt is Associate Professor of History at Vassar College. Her published works include articles on the Tlaxcalan colonies of northern New Spain and on Indian-Hispanic contact in the Mexican Northeast.
TABLE OF CONTENTS