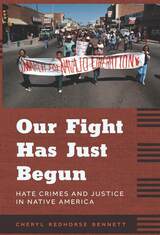 Our Fight Has Just Begun is a timely and urgent work. The result of more than a decade of research, it revises history, documents anti-Indianism, and gives voice to victims of racial violence. Navajo scholar Cheryl Redhorse Bennett reveals a lesser-known story of Navajo activism and the courageous organizers that confronted racial injustice and inspired generations.

While this book looks deeply at multiple generations of unnecessary and ongoing pain and violence, it also recognizes that this is a time of uncertainty and hope. The movement to abolish racial injustice and racially motivated violence has gained fierce momentum. Our Fight Has Just Begun shows that racism, hate speech, and hate crimes are ever present and offers recommendations for racial justice.
AUTHOR BIOGRAPHY
Cheryl Redhorse Bennett is an enrolled citizen of the Navajo Nation and also descends from the Comanche Nation. She is an assistant professor at Montana State University.