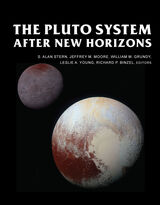 Once perceived as distant, cold, dark, and seemingly unknowable, Pluto had long been marked as the farthest and most unreachable frontier for solar system exploration. After Voyager accomplished its final planetary reconnaissance at Neptune in 1989, Pluto and its cohort in the Kuiper Belt beckoned as the missing puzzle piece for completing the first reconnaissance of our solar system. In the decades following Voyager, a mission to the Pluto system was not only imagined but also achieved, culminating with the historic 2015 flyby by the New Horizons spacecraft. Pluto and its satellite system (“the Pluto system”), including its largest moon, Charon, have been revealed to be worlds of enormous complexity that fantastically exceed preconceptions.

The Pluto System After New Horizons seeks to become the benchmark for synthesizing our understanding of the Pluto system. The volume’s lead editor is S. Alan Stern, who also serves as NASA’s New Horizons Principal Investigator; co-editors Richard P. Binzel, William M. Grundy, Jeffrey M. Moore, and Leslie A. Young are all co-investigators on New Horizons. Leading researchers from around the globe have spent the last five years assimilating Pluto system flyby data returned from New Horizons. The chapters in this volume form an enduring foundation for ongoing study and understanding of the Pluto system. The volume also advances insights into the nature of dwarf planets and Kuiper Belt objects, providing a cornerstone for planning new missions that may return to the Pluto system and explore others of the myriad important worlds beyond Neptune.
AUTHOR BIOGRAPHY
S. Alan Stern is the New Horizons Mission Principal Investigator and lead editor of The Pluto System After New Horizons.

Richard P. Binzel, a New Horizons co-investigator, is a professor of planetary science and joint professor of aerospace engineering at the Massachusetts Institute of Technology.

Leslie A. Young, a New Horizons co-investigator, is a planetary scientist at Southwest Research Institute, serving as deputy project scientist for the New Horizons mission.