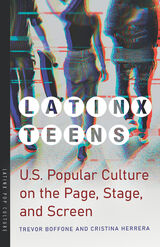 What can Latinx youth contribute to critical conversations on culture, politics, identity, and representation? Latinx Teens answers this question and more by offering an energetic, in-depth look at how Latinx teenagers influence twenty-first-century U.S. popular culture.

In this exciting new book, Trevor Boffone and Cristina Herrera explore the diverse ways that contemporary mainstream film, television, theater, and young adult literature invokes, constructs, and interprets adolescent Latinidad. Latinx Teens shows how coming-of-age Latinx representation is performed in mainstream media, and how U.S. audiences consume Latinx characters and stories. Despite the challenges that the Latinx community face in both real and fictional settings, Latinx teens in pop culture forge spaces that institutionalize Latinidad. Teen characters make Latinx adolescence mainstream and situate teen characters as both in and outside their Latinx communities and U.S. mainstream culture, conveying the complexities of “fitting in,” and refusing to fit in all at the same time.

Fictional teens such as Spider-Man’s Miles Morales, I Am Not Your Perfect Mexican Daughter’s Julia Reyes, Party of Five’s Acosta siblings, and In the Heights’s Nina Rosario comprise a growing body of pop culture media that portray young Latinxs as three-dimensional individuals who have agency, authenticity, and serious charisma. Teenagers and young adults have always had the power to manifest social change, and this book acknowledges, celebrates, and investigates how Latinx teens in popular culture take on important current issues.

With a dynamic interdisciplinary approach, Latinx Teens explores how Latinxs on the cusp of adulthood challenge, transform, expand, and reimagine Latinx identities and their relationships to mainstream U.S. popular culture in the twenty-first century.

The book makes a critical intervention into Latinx studies, youth studies, and media cultures. Students and scholars alike will benefit from the book’s organization, complete with chapters that focus on specific mediums and conclude with suggestions for further reading and viewing. As the first book that specifically examines Latinx adolescence in popular culture, Latinx Teens insists that we must privilege the stories of Latinx teenagers in television, film, theater, and literature to get to the heart of Latinx popular culture. Exploring themes around representation, identity, gender, sexuality, and race, the works explored in this groundbreaking volume reveal that there is no single way to be Latinx, and show how Latinx youth are shaping the narrative of the Latinx experience for a more inclusive future.

Trevor Boffone is a lecturer in the Women’s, Gender & Sexuality Studies Program at the University of Houston. He is the author of Renegades: Digital Dance Cultures from Dubsmash to TikTok.

Cristina Herrera is director of Chicano and Latino Studies at Portland State University, where she is a professor. She is the author of ChicaNerds in Chicana Young Adult Literature: Brown and Nerdy.