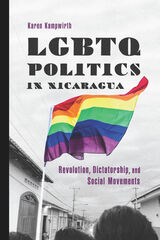 LGBTQ Politics in Nicaragua: Revolution, Dictatorship, and Social Movements
by Karen Kampwirth
University of Arizona Press
eISBN: 978-0-8165-4525-4
Cloth: 978-0-8165-4279-6
The modern political tumult of Nicaragua includes revolution, dictatorship, and social movements. LGBTQ Politics in Nicaragua explores the untold stories of the LGBTQ community of Nicaragua and its role in the recent political history of the country.

Karen Kampwirth is a renowned scholar of the Nicaraguan Revolution, who has been writing at the intersection of gender and politics for decades. In this chronological telling of the last fifty years of political history in Nicaragua, Kampwirth deploys a critical new lens: understanding politics from the perspective of the country’s LGBTQ community. Kampwirth details the gay and lesbian guerrillas in the 1960s and 1970s, Nicaragua’s first openly gay television wizard in the 1980s, and the attempts by LGBTQ revolutionaries to create a civil rights movement and the subsequent squashing of that movement by the ruling Sandinista party. She analyzes the shifting political alliances, the rise of strong feminist and LGBTQ movements in Nicaragua, and the attempts by the administration of Daniel Ortega to co-opt and control these movements.

Ultimately, this is a story of struggle and defeat, progress and joy. This timely book provides a well-documented review of LGBTQ politics in modern Nicaragua, helping us to see the Sandinista Revolution and its ongoing aftermath in a new light.
AUTHOR BIOGRAPHY
Karen Kampwirth is the Robert W. Murphy Professor of Political Science at Knox College. She is the author or editor of five books on Latin American politics.