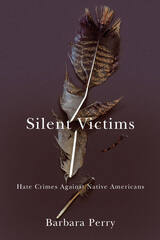 Hate crimes against Native Americans are a common occurrence, Barbara Perry reveals, although most go unreported. In this eye-opening book, Perry shines a spotlight on these acts, which are often hidden in the shadows of crime reports. She argues that scholarly and public attention to the historical and contemporary victimization of Native Americans as tribes or nations has blinded both scholars and citizens alike to the victimization of individual Native Americans. It is these acts against individuals that capture her attention.

Silent Victims is a unique contribution to the literature on hate crime. Because most extant literature treats hate crimes—even racial violence—rather generically, this work breaks new ground with its findings. For this book, Perry interviewed nearly 300 Native Americans and gathered additional data in three geographic areas: the Four Corners region of the U.S. Southwest, the Great Lakes, and the Northern Plains. In all of these locales, she found that bias-related crime oppresses and segregates Native Americans.

Perry is well aware of the history of colonization in North America and its attendant racial violence. She argues that the legacy of violence today can be traced directly to the genocidal practices of early settlers, and she adds valuable insights into the ways in which “Indians” have been constructed as the Other by the prevailing culture. Perry’s interviews with Native Americans recount instances of appalling treatment, often at the hands of law enforcement officials. In her conclusion, Perry draws from her research and interviews to suggest ways in which Native Americans can be empowered to defend themselves against all forms of racist victimization.
TABLE OF CONTENTS