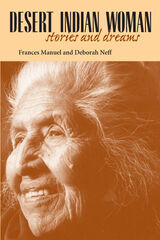 Basket weaver, storyteller, and tribal elder, Frances Manuel is a living preserver of Tohono O’odham culture. Speaking in her own words from the heart of the Arizona desert, she now shares the story of her life. She tells of O’odham culture and society, and of the fortunes and misfortunes of Native Americans in the southwestern borderlands over the past century.

In Desert Indian Woman, Frances relates her life and her stories with the wit, humor, and insight that have endeared her to family and friends. She tells of her early childhood growing up in a mesquite brush house, her training in tribal traditions, her acquaintance with Mexican ways, and her education in an American boarding school. Through her recollections of births and deaths, heartache and happiness, we learn of her family’s migration from the reservation to the barrios and back again. In the details of her everyday life, we see how Frances has navigated between O’odham and American societies, always keeping her grandparents’ traditional teachings as her compass.

It is extraordinary to hear from a Native American woman like Frances, in her own words and her own point of view, to enter the complex and sensitive aspects of her life experience, her sorrows, and her dreams. We also become privy to her continuing search for her identity across the border, and the ways in which Frances and Deborah have attempted to make sense of their friendship over twenty-odd years. Throughout the book, Deborah captures the rhythms of Frances’s narrative style, conveying the connectedness of her dreams, songs, and legends with everyday life, bringing images and people from faraway times and places into the present.

Deborah Neff brings a breadth of experience in anthropology and Southwest Native American cultures to the task of placing Frances Manuel’s life in its broader historical context, illuminating how history works itself out in people’s everyday lives. Desert Indian Woman is the story of an individual life lived well and a major contribution to the understanding of history from a Native American point of view.

AUTHOR BIOGRAPHY
Frances Manuel was born in Ko:m Wawhai, Arizona, in 1912 and now lives on the Tohono O’odham reservation near Sells, Arizona. Deborah Neff is an anthropologist whose work in ritual, theater, and folklore has contributed to her interest in poetics and experimental writing. She lives between Tucson and her home in Washington state.
TABLE OF CONTENTS

Part IV God and I’itoi: Speeches from the Heart
12 Christianity
13 The Church at San Pedro
14 My Saints
15 Modern Medicine People