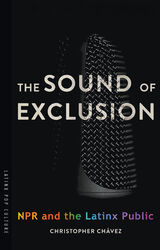 The Sound of Exclusion: NPR and the Latinx Public
by Christopher Chávez
University of Arizona Press
eISBN: 978-0-8165-4433-2
Paper: 978-0-8165-4276-5
As a network that claims to represent the nation, NPR asserts unique claims about what it means to be American. In The Sound of Exclusion, Christopher Chávez critically examines how National Public Radio conceptualizes the Latinx listener, arguing that NPR employs a number of industry practices that secure its position as a white public space while relegating Latinx listeners to the periphery. These practices are tied to a larger cultural logic. Latinx identity is differentiated from national identity, which can be heard through NPR’s cultivation of an idealized dialect, situating whiteness at its center. Pushing Latinx listeners to the edges of public radio has crucial implications for Latinx participation in civic discourses, as identifying who to include in the “public” audience necessarily involves a process of exclusion.

Chávez analyzes NPR as a historical product that has evolved alongside significant changes in technology, industry practice, and demography. In The Sound of Exclusion, Chávez asks these pressing questions: What kind of news organization was NPR intended to be? What has it become over time? In what ways is it evolving to meet the needs of a nation, in which U.S. Latinxs are becoming an increasingly larger portion of the American public that NPR serves? Informed by more than fifty in-depth interviews conducted with public radio practitioners from all aspects of the business, Chávez addresses how power is enacted in everyday broadcast practices. By interrogating industry practices, we might begin to reimagine NPR as a public good that serves the broad and diverse spectrum of the American public.

AUTHOR BIOGRAPHY
Christopher Chávez is an associate professor in the School of Journalism and Communication at the University of Oregon. He holds a PhD in communications from the University of Southern California. He is author of Reinventing the Latino Television Viewer: Language Ideology and Practice and co-editor of Identity: Beyond Tradition and McWorld Neoliberalism.