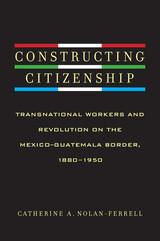 During the late nineteenth and early twentieth centuries, people living in the coffee-producing region of the Sierra Madre mountains along the Pacific Coast of Mexico and Guatemala paid little attention to national borders. The Mexican Revolution,—particularly during the 1930s reconstruction phase—ruptured economic and social continuity because access to revolutionary reforms depended on claiming Mexican national identity. Impoverished, often indigenous rural workers on both sides of the border used shifting ideas of citizenship and cultural belonging to gain power and protect their economic and social interests.
With this book Catherine Nolan-Ferrell builds on recent theoretical approaches to state formation and transnationalism to explore the ways that governments, elites, and marginalized laborers claimed and contested national borders. By investigating how various groups along the Mexico-Guatemala border negotiated nationality, Constructing Citizenship offers insights into the complex development of transnational communities, the links between identity and citizenship, and the challenges of integrating disparate groups into a cohesive nation. Entwined with a labor history of rural workers, Nolan-Ferrell also shows how labor struggles were a way for poor Mexicans and migrant Guatemalans to assert claims to national political power and social inclusion.
Combining oral histories with documentary research from local, regional, and national archives to provide a complete picture of how rural laborers along Mexico's southern border experienced the years before, during, and after the Mexican Revolution, this book will appeal not only to Mexicanists but also to scholars interested in transnational identity, border studies, social justice, and labor history.
AUTHOR BIOGRAPHY

Catherine Nolan-Ferrell is an assistant professor of history at the University of Texas at San Antonio.