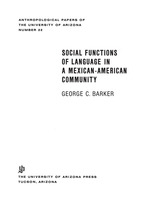 Social Functions of Language in a Mexican-American Community is an inquiry into how language functions in the life of a bilingual minority group in process of cultural change, this study investigated the acculturation and assimilation of individuals of Mexican descent living in Tucson, Arizona. Specifically, the language usage and interpersonal relations of individuals from representative families in the bilingual community of Tucson, the usage of bilingual social groups in the community, and the linguistic and cultural contacts between bilinguals and members of the larger Tucson community were examined.

Data were drawn from observational studies of individuals and families; observation of group activities; and observation of, supplemented by questionnaires on, the cultural interests of Mexican children and their families. Some conclusions of the study were that Spanish came to be identified in the Mexican community as the language of intimate and family relations, while English came to be identified as the language of formal social relations and of all relations with Anglos. It was also found that the younger American-born group reject both Spanish and English in favor of their own language, Pachuco. Tables depicting the characteristics of 20 families, the language usage of families, and the language usage in personal relationships of English and Spanish are included. Suggestions for further research are made.
AUTHOR BIOGRAPHY
George Carpenter Barker (1912-1958) combined his wide-ranging interests with a well-balanced professional background. He received both the M.A. and Ph.D. degrees in anthropology from the University of Chicago, the latter in 1947. Previously he has received an undergraduate in history from the University of California, Los Angeles, and an M.S. degree in journalism from Columbia University.
TABLE OF CONTENTS
Contents
1. The Social Functions of Language
2. Statement of the Problem
3. Sociological Background - Tucson in Mid-1940s
4. Language Usage and Backgorund
5. Individual Linguistic Systems and Interpersonal Relations
6. Linguistics Behavior in the Community and in Interpersonal Relations
7. Language Usage and Family Structures
8. Language Usage and the Neighborhood
9. Language Usage and Cultural Orientation
10. Resume and Conclusions
11. Suggestions for Further Research
References