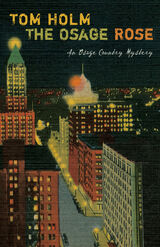 Corrupt lawmen, insatiable businessmen, and an oil boom on Indian land. This is the milieu in which Tom Holm sets his gritty and provocative detective novel.

Life is looking easy for J. D. Daugherty, a crusty ex-cop who has set up his own PI firm in Tulsa, Oklahoma, just after World War I. J. D. expects to make a straightforward living off the intrigues of the city’s wealthy socialites, but then Rose Chichester, a privileged young white woman, runs off with Tommy Ruffle, a young Indian who is heir to Osage oil. Hired by Rose’s father to track down the young pair, J. D. and his associate, a Cherokee named Hoolie Smith, find themselves caught in the cross fire of a deadly scheme. When Tommy turns up murdered and with Rose still missing, J. D. and Hoolie must navigate a twisting maze of deception, race riots, and gun battles in their unrelenting search for the truth—a search that ultimately leads to an intimate secret no one suspected.

Tom Holm writes a true private-eye mystery, yet he entwines the story’s layers of conspiracy and deceit with the realities of prejudice and hatred that existed during the early years of Oklahoma statehood. Rooted firmly in its time, Holm’s well-researched novel tells a complex and compelling story of individuals struggling to find justice at any cost in a world still caught between modernity and its Wild West legacy.
AUTHOR BIOGRAPHY
Tom Holm has been a professor of American Indian Studies at the University of Arizona in Tucson since 1980. During that time, he has won several prestigious teaching and mentoring awards. His latest monograph, The Great Confusion in Indian A√airs: Natives and Whites in the Progressive Era, was published by the University of Texas Press in 2005. In 1996, his book, Strong Hearts, Wounded Souls was a finalist for the Victor Turner Prize in Ethnology.

Holm is Muscogee Creek and Cherokee, enrolled in the Cherokee Nation, and is very active in Native community a√airs. Born in northeastern Oklahoma, he attended Northeastern State College in Tahlequah and later received three degrees from the University of Oklahoma at Norman. Since 2004, he has served the Cherokee Nation as a member of the Sequoyah Commission, a group of Cherokee scholars, and he has been named as a member of the American Indian Graduate Center’s Council of 100, a group of elders, scholars, and leaders.

A Vietnam veteran who served with Bravo Company, 1st Battalion, 3rd Marines, from 1967 to 1968, Holm has a deep interest in veterans’ a√airs. He was a member of the first Native American advisory committee to the Veterans Administration, and he is a former president of the Arizona Territory Gourd Society and the Southwest Gourd Society (Native American veterans’ societies). He sings with the Panther Creek Singers, a traditional Southern Drum group. Professor Holm and Ina, his wife of thirty-eight years, have two sons and four grandchildren.
TABLE OF CONTENTS
Prologue
1. The Chichester Operation
2. The Plan
3. J.D.
4. Hoolie
5. Hominy
6. Tommy Ruffle
7. Ben Lookout
8. Clients
9. Pete Henderson
10. Arrangements
11. Jailhouse John
12. Minnie
13. Rose Chichester
14. The Panther
15. Rose Shelby
Epilogue