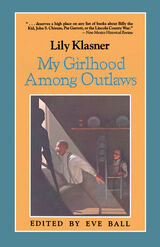 Lily Klasner learned the harsh realities of frontier life at an early age. Born in Texas in 1862, she was only five when her family lost most of their provisions in an Indian raid while trekking to New Mexico; their ranch on the Pecos became a stopover for outlaws; and she assumed leadership of the family at thirteen when her father was murdered.

In My Girlhood Among Outlaws, Lily recalls her experiences with Billy the Kid and other desperadoes, and sets the record straight on popular misrepresentations of events. Of particular interest to historians is her preservation of the diary of famous cattleman and family friend John Chisum.
AUTHOR BIOGRAPHY
Eve Ball has lived in the Ruidoso highlands of New Mexico, close to the Mescalero Reservation. Geography made her neighbor to the Apaches; sympathy and liking made her their friend; sensitivity to their part in the historic Southwestern drama made her their historian—able to see experience through their eyes, just as she used the lends of a pioneer Lincoln County woman to view and relate the saga of Ma’am Jones of the Pecos. She also edited and annotated the colorful Lily Klasner autobiography My Girlhood Among Outlaws.

Lily Casey Klasner was truly a child of the New Mexico nineteenth-century frontier, encountering its turbulence and hardships in westward migration and later in Indian raids that robbed her family of most of their possessions. Although her formal education was intermittent, Mrs. Klasner attended the New Mexico Highlands University at Las Vegas and became a teacher and telegrapher as well as a rancher. She also became a writer, and from a meticulous diary, reinforced by letters, clippings, pictures and documents, she fashioned an autobiography, further guided and shaped by historians Maurice Garland Fulton and Eric Bruce.
TABLE OF CONTENTS