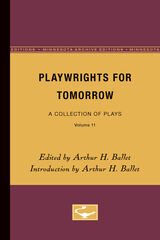 Playwrights for Tomorrow was first published in 1967. Minnesota Archive Editions uses digital technology to make long-unavailable books once again accessible, and are published unaltered from the original University of Minnesota Press editions.

This is the fourth in a series of volumes which offer collections of plays by dramatists who have participated in an experimental program conducted at the University of Minnesota under the auspices of the Office of Advanced Drama Research (O.A.D.R.). Dr. Arthur H. Ballet, editor of the series, is the director of the O.A.D.R.

This volume contains three full-length plays and one short play. They are The World Tipped Over, and Laying on Its Side (one act) by Mary Feldhaus-Weber, Visions of Sugar Plums by Barry Pritchard, The Strangler by Arnold Powell, and The Long War by Kevin O' Morrison. Mary Feldhaus-Weber is a St. Paul poet who has chosen to work in the theatre. Mr. Pritchard, a former playwright in residence at Theatre St. Paul, now writes for television and films in Hollywood. Mr. Powell is a teacher and theatre director at Birmingham-Southern College in Atlanta, and Mr. O'Morrison pursues an acting career in the Broadway theatre.

As Dr. Ballet explains in his introduction, the program of the O.A.D.R. is designed to give promising playwrights a testing ground for their ideas, skills, and talents by providing them with a chance to have their plays actually produced and, whenever possible, the opportunity of working with the producing groups. He points out that a number of the writers associated with the O.A.D.R. have subsequently moved into the mainstream of contemporary American theatre. Publication of the plays will, it is hoped, bring them to the attention of larger audiences and stimulate further critical appraisal.

AUTHOR BIOGRAPHY
Arthur H. Ballet is a retired Professor of Theater Arts and Dance at the University of Minnesota.