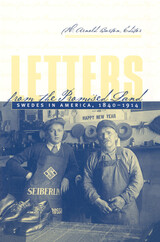 Swedish immigrants tell their own stories in this collection of letters, diaries, and memoirs-a perfect book for those interested in history, immigration, or the daily lives of early American-Swedish settlers.

"Barton has fulfilled his great task with an admirable knowledge, breadth of perspective, talent, and prudence. He deserves the title 'the Swedish American of the year,' awarded to him in his ancestor's country in 1988." --The American Historical Review

"Open the volume anywhere and we touch life quickened as only the immigrant experience could quicken it." --Western Historical Review

"To be sure, this is not the typical book on American immigration history-it is that and more. It is seminal and 'alive' history. It is the people as history and historians. It is special." --Manuscripta

"A fine study that needs to be replicated with other ethnic groups." --Journal of American Ethnic History