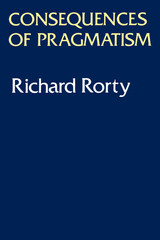 Consequences Of Pragmatism: Essays 1972-1980
by Richard Rorty
University of Minnesota Press, 1982
Paper: 978-0-8166-1064-8
Rorty seeks to tie philosophy’s past to its future by connecting what he sees as the positive (and neglected) contributions of the American pragmatic philosophers to contemporary European developments. What emerges from his explorations is a revivified version of pragmatism that offers new hope for the future of philosophy.“Rorty’s dazzling tour through the history of modern philosophy, and his critical account of its present state (the best general introduction in print), is actually an argument that what we consider perennial problems--mind and body, consciousness and objects, the foundations of knowledge, the fact/value distinction--are merely the dead-ends this picture leads us into.” Los Angeles Times Book Review“It can immediately be said that Consequences of Pragmatism must be read by both those who believe that they agree and those who believe that they disagree with Richard Rorty. [He] is far and away the most provocative philosophical writer working in North America today, and Consequences of Pragmatism should make this claim even stronger.”The Review of Metaphysics“Philosophy, for Rorty, is a form of writing, a literary genre, closer to literary criticism than anything else, a criticism which takes for one of its major concerns the texts of the past recognized as philosophical: it interprets interpretations. If anyone doubts the continued vigor and continuing relevance of American pragmatism, the doubts can be laid to rest by reading this book.” Religious Studies Review