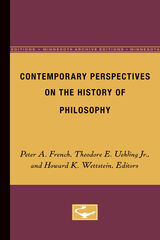 Contemporary Perspectives on the History of Philosophy was first published in 1983. Minnesota Archive Editions uses digital technology to make long-unavailable books once again accessible, and are published unaltered from the original University of Minnesota Press editions.

The authors of the 27 appears in Volume 8, Midwest Studies in Philosophy,have established reputations as historians of philosophy, but their vantage point, here, is from "contemporary perspectives" - they use contemporary analytic skills to examine problems and issues considered by past philosophers. The papers, arranged in historical order, fall into six groups: ancient philosophy (the Pythagoreans, Plato, and Aristotle); the seventeenth-century rationalists (Descartes, Leibniz and Spinoza); the empiricists (Locke, Berkeley, and Hume); Kant; the nineteenth century (Hegel, Schopenhauer, and Mill); and, in conclusion, an essay on Wittgenstein's Tractatus and two broad, retrospective papers entitled "Old Analyses of the Physical World and new Philosophies of Language" and "Moral Crisis and the History of Ethics."

AUTHOR BIOGRAPHY
Howard K. Wettstein is professor of philosophy at the University of California, Riverside.