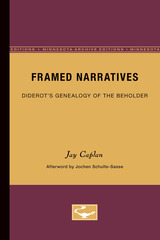 The work of French philosophe Denis Diderot (1713-1784) has inspired conflicting reactions in those who encounter him. Diderot has been admired and despised; he has moved his readers and irritated them - often at the same time. His work continually shifts between mutually exclusive positions - neither of which provides an entirely satisfactory answer to the question at hand, yet neither of which can be disregarded. The nature of these paradoxes has been the fundamental problem in Diderot, a problem that his interpreters have approached by imagining synthetic perspectives or frames within which the paradoxes could be resolved.

In Framed Narratives, Jay Caplan focuses on the problem of framing in and of Diderot. He proposes an interpretive model that draws upon the notion of dialogue developed by Mikhail Bakhtin. For Bakhtin, no utterance can be reduced to a univocal meaning; one's discourse is always marked by other voices. In Diderot, Caplan shows, the narrative device of the tableau engages the reader (or beholder) in a dialogic relationship with the author and the characters. Diderot defines the players of those roles as members of a family, one of whom is always missing, and that sacrificial relationship becomes an integral part of the text. Caplan then uses the concept of the tableau to interpret the rhetoric of gender, genre, and pathos in Diderot's works for and about the theater, his novel The Nun, the philosophical dialogue D'Alembert's Dream,and his correspondence.

What emerges from these readings is not only an interpretation of certain texts, but a description of Diderot's—and, by implication, early bourgeois—poetics. Framed Narratives is, in addition, one of the first attempts to rely upon Bakhtin's concepts in the interpretation of specific texts, in this case the work of an essentially dialogic writer. A socio-historical supplement to Framed Narratives is provided in Jochen Schulte-Sasse's afterword.

AUTHOR BIOGRAPHY
Jochen Schulte-Sasse teaches in the humanities at the University of Minnesota and coedited the series Theory and History of Literature with Wlad Godzich.