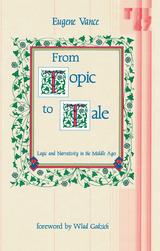 From Topic to Tale was first published in 1987. Minnesota Archive Editions uses digital technology to make long-unavailable books once again accessible, and are published unaltered from the original University of Minnesota Press editions.

The transition from the Middle Ages to the Renaissance has been discussed since the 1940s as a shift from a Latinate culture to one based on a vernacular language, and, since the 1960s, as a shift from orality to literacy. From Topic to Tale focuses on this multifaceted transition, but it poses the problem in different terms: it shows how a rhetorical tradition was transformed into a textual one, and ends ultimately in a discussion of the relationship between discourse and society.

The rise of French vernacular literacy in the twelfth century coincided with the emergence of logic as a powerful instrument of the human mind. With logic come a new concern for narrative coherence and form, a concern exemplified by the work of Chretien de Troyes. Many brilliant poetic achievements crystallized in the narrative art of Chretien, establishing an enduring tradition of literary technique for all of Europe. Eugene Vance explores the intellectual context of Chretien's vernacular literacy, and in particular, the interaction between the three "arts of language" (grammar, logic, and rhetoric) compromising the trivium. Until Vance, few critics have studied the contribution of logic to Chretiens poetics, nor have they assessed the ethical bond between rationalism and the new heroic code of romance.

Vance takes Chretien de Troyes' great romance, Yvain ou le chevalier au lion,as the centerpiece of the Twelfth-Century Renaissance. It is also central to his own thesis, which shows how Chretien forged a bold new vision of humans as social beings situated between beasts and angels and promulgated the symbolic powers of language, money, and heraldic art to regulate the effects of human desire. Vance's reading of the Yvain contributes not only to the intellectual history of the Middle Ages, but also to the continuing dialogue between contemporary critical theory and medieval culture.

Eugene Vance is professor of French and comparative literature at Emory University and principal editor of a University of Nebraska series, Regents Studies in Medieval Culture. Wlad Godzich is director of the Center for Humanistic Studies at the University of Minnesota and co-editor of the series Theory and History of Literature.