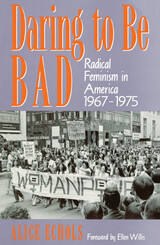 Daring To Be Bad: Radical Feminism in America 1967-1975
by Alice Echols
University of Minnesota Press, 1989
Paper: 978-0-8166-1787-6
Combines intellectual and social history with collective biography to present the first historical study of the radical feminist movement in America.

"A fine introduction to the bold, contentious, complicated women who categorically refused to be good little girls, and thereby changed the way our culture defines male-female relations." --Voice Literary Supplement

"Daring to Be Bad offers the kind of critical attention that contemporary feminism has lacked." --The Nation

"Far beyond mere nostalgic value, the enduring worth of Echols' book is as a resource, not only for the future women's studies courses, but for all who want to understand contemporary feminism. The book supplies essential background that explains the splits which persist in the feminist movement today. Cheers to Daring to Be Bad." --New Directions for Women

"Daring to Be Bad is a welcome addition to feminist bookshelves. It breaks new ground, making creative use of extensive interviews and early feminist publications to recreate the environment that elicited and shaped radical feminism." --Sojourner

"Daring to Be Bad is like a long consciousness-raising session: It prods, validates, and witnesses. Echols offers an oral history that is also an homage. We're given the benefit of a clear and honest eye cast over two decades' span of women working on that most influential social struggle toward liberation." --Village Voice

"Daring to Be Bad is a valuable book that grapples with the diversity inherent within the women's movement while maintaining a critical stance throughout." --American Journal of Sociology

"This fine and sympathetic interpretation of the origin and evolution of radical feminism will give students of women's history a glimpse of the passion of those hours and help explain why a new order did not emerge from them." American Historical Review

"As the first major scholarly work on the history of the U.S. feminist movement, Daring to Be Bad makes an important contribution to the history of the politics of contemporary American feminism, providing a richly detailed history of that wing of the women's movement . . . ." --The Annals of the American Academy

"Echols gives a rich, detailed history of radical feminism's heyday from 1967 to 1971 and offers the type of critical interpretation of the women's liberation movement that contemporary feminism has lacked." --Socialist Review

"Daring to Be Bad is path-breakingbased on abundant and painstaking interviewing, as well as the tracking down and assembling of the ephemera of short-lived committees, cells, and association. Echols's writing is lucid, detailed, and extremely responsible." --American Quarterly

Named an Outstanding Book on Intolerance in the U. S. by the Gustavus Myers Center