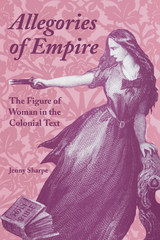 Allegories of Empire: The Figure of Woman in the Colonial Text
by Jenny Sharpe
University of Minnesota Press, 1993
Paper: 978-0-8166-2060-9
Allegories of Empire was first published in 1993.“Allegories of Empire re-constellates a metropolitan masterpiece, Forster’s A Passage to India, within colonial discourse studies. Sharpe, a materialist feminist, is scrupulous in her use of theory to articulate nationalism, historical race-gendering, and contemporary feminist critique.” -Gayatri Chakravorty Spivak, Columbia University“Jenny Sharpe has done a great service in opening up the virtually taboo subject of the rape of the white woman by the colored man, and, furthermore, in teaching us theory - making by locating this frenzy of fantasy and reality within a specific crisis of European colonialism in India. ... In showing how a ‘wild anthropology’ must continuously rework feminism in the face of racism, and vice versa, she shows how the margins of empire were and still are at its center.” -Michael Taussig, New York UniversityAllegories of Empire introduces race and colonialism to feminist theories of rape and sexual difference, deploying women’s writing to undo the appropriation of English (universal) womanhood for the perpetuation of Empire.Sharpe brings the historical memory of the 1857 Indian Mutiny to bear upon the theme of rape in British adn Anglo-Indian fiction. She argues that the idea of Indian men raping white women was not part of the colonial landscape prior to the revolt that was remembered as the savage attack of mutinous Indian soldiers on defenseless English women.By showing how contemporary theories of female agency are implicated in an imperial past, Sharpe argues that such models are inappropriate, not only for discussion of colonized women, but for European women as well. Ultimately, she insists that feminist theory must begin from difference and dislocation rather than from identity and correspondence if it is to get beyond the race-gender-class impasse.Jenny Sharpe received her Ph.D. in comparative literature at the University of Texas at Austin and is currently a professor of English at the University of California at Los Angeles. She has contributed articles to Modern Fiction Studies, Genders, and boundary 2.
TABLE OF CONTENTS