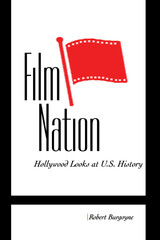 Our movies have started talking back to us, and Film Nation takes a close look at what they have to say. In movies like JFK and Forrest Gump, Robert Burgoyne sees a filmic extension of the debates that exercise us as a nation--debates about race and culture and national identity, about the nature and makeup of American history.

In analyses of five films that challenge the traditional myths of the nation-state--Glory, Thunderheart, JFK, Born on the Fourth of July, and Forrest Gump--Burgoyne explores the reshaping of our collective imaginary in relation to our history. These movies, exploring the meaning of "nation" from below, highlight issues of power that underlie the narrative construction of nationhood. Film Nation exposes the fault lines between national myths and the historical experience of people typically excluded from those myths.

Throughout, Burgoyne demonstrates that these films, in their formal design, also preserve relics of the imaginary past they contest. Here we see how the "genre memory" of the western, the war film, and the melodrama shapes these films, creating a complex exchange between old concepts of history and the alternative narratives of historical experience that contemporary texts propose.

The first book to apply theories of nationalism and national identity to contemporary American films, Film Nation reveals the cinematic rewriting of history now taking place as a powerful attempt to rearticulate the cultural narratives that define America as a nation.

"The chief merit of Film Nation is that it outlines a study of an important but neglected period of American film--the 1980s--from a sophisticated historiographical perspective, a complex version of postmodernism and cultural studies. That is, it arises, conceptually speaking, from within the film studies orbit and takes advantage in a provocative, and in my view, compelling way, the resources and perspectives of contemporary critical theory more generally." Nick Brown

"Film Nation makes a real contribution to film studies by underscoring how much the 'war film' has been revived for the purpose of contemplating nationhood, and how, more implicitly, the idea of 'America' or even 'identity' has become increasingly problematic in the era of international democratic capitalism." Tom Conley

"A brilliant and elegant series of essays which demonstrate how the best contemporary historical films provide a powerful counternarrative to traditional history and help us to rethink the American past. Burgoyne's is by far the best book to date on the important relationship between American history and American film." Robert A. Rosenstone

Race and Nation in Glory

The Western and the National Imaginary

The Western and its Tropes of Space and Nation

War and the Forging of Ethnic Community

National Identity, Gender Identity and the "Rescue Fantasy" in Born on the 4th of July

The Critique of Masculinity as "Punitive Agency"

Modernism and the Narrative of Nation in JFK

The Temporality of Trauma

The Imagined Community as Lost Object

Robert Burgoyne is professor of English and film studies at Wayne State University and is chair of the Department of English. He is the author of Bertolucci's 1900: A Narrative and Historical Analysis (1991) and coauthor, with Robert Stam and Sandy Flitterman-Lewis, of New Vocabularies in Film Semiotics (1992).