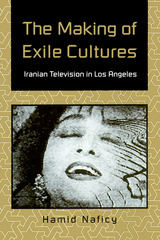 Naficy explores the seemingly contradictory way in which immigrant media and cultural productions serve as the source both of resistance and opposition to the domination by host and home country's social values while simultaneously serving as vehicles for personal and cultural transformation and assimilation of those values.

"An important contribution to cultural anthropology. The Making of Exile Cultures is meticulously researched. It is no small achievement of the book that is pulls the focus in Middle East studies from geographically cohesive national cultures, 'hard' politics and high culture (art, literature) to exile cultures, media politics and the popular. Although it is a close case study, The Making of Exile Cultures participates in debates and methodologies across a range of disciplines beyond media studies. It is not simply a much-needed contribution to the growing set of micro-histories of local media use. Rather, it demonstrates the increasing centrality of minority television cultures to the overall structure of North American mainstream television. The Making of Exile Cultures should be read and used by media theorists, then, not just because it fills in another gap in knowledge of narrowcast television's heterogeneous field (as if there were a collective puzzle in the making here), but because it provides media theory with some important new ways of working through the particular questions of race, gender, nation, industry and audience that come into play regardless of our respective 'local' interest." Screen

"Fresh, stimulating, and an extremely valuable contribution to the study of cultural production amongst immigrants and the articulation of local and transnational identities. A fascinating study of the cultural politics of identity." Middle East Journal

"The Making of Exile Cultures transcends its limited scope and ethnographic ambitions to poignantly illuminate a truly multicultural situation. Naficy's engaging prose and personal anecdotes made the dry ethnography not just palatable but fascinating. This was not merely a sociological analysis of the interaction of television aesthetics and a group in exile. It was not merely a collection of copious details and taxonomies about what was broadcast when and by whom. It was not merely a study of now an exile group expresses nostalgic longing and fetishistic desire for an absent home. The power of this book is found in narratives, stories, and recollections of the author and interviewees. Naficy saves his study from falling into the banality of charts, tables, and taxonomies through his ability to tie something very specific to the larger issue of what means to live in exile." SubStance

"In this book, Naficy provides us with an example of exilic agency and the possibilities that can come about when hybridized exiles use their unique perspective gained form a split-subjectivity. This book is highly recommended for scholars in immigration studies as well as those engaged in cultural studies and the field of mass media and communications." Journal of American Ethnic History

"Ultimately, The Making of Exile Cultures: Iranian Media in Los Angeles is an important contribution to the growing scholarship on Iranians in diaspora and serves best as a handbook for decoding the popular culture of Iranians in Los Angeles. Naficy's book serves as the best model yet for studying Iranian culture among the expatriate communities, a model which goes beyond one-dimensional stereotypes or demographic and statistical analyses to provide an intimate and analytical study of a culture undergoing chaotic change." JUSUR (The UCLA Journal of Middle Eastern Studies)

"An important contribution to both Iranian and cultural studies. Exile Cultures provides an illuminating study of the mediating role of television in transforming an exile community into an ethnicity. Naficy's careful discussions of its political economy and textual politics offer valuable insights into the micro-practices of this exilic culture, insights that should prove useful to a broad range of readers, from those interested in the general questions of ethnicity and community in the United States to scholars working on the more specific issues of Iranian culture." International Journal of Middle East Studies

"Naficy's own blend of rigorous research, well presented data, and thorough knowledge of the theories to which he refers is an illustration of the kind of a successful syncretism he observes in the material he studies." Canadian Review of Comparative Literature

"This is an excellent study of the understudied world of Iranian popular culture in exile. An indispensable source of knowledge about contemporary Iran and life in exile in the vast diaspora formed in the wake of the 1978-79 revolution." Iranian Studies