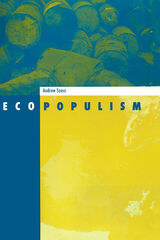 "This slim but well-documented book raises far more questions than it answers, which, in and of itself, is of course a noteworthy contribution. Szasz has called attention to specific aspects of the hazardous waste movement that have been heretofore overlooked, and he thereby provides us with a wealth of new questions to address and answer." Ethics, Place and Environment

"Szasz does a commendable job of linking the crucial issues of class, race and gender-issues that are often either ignored or downplayed-to the environment. Szasz compellingly argues that toxic victims are usually poor or working class. EcoPopulism is recommended not only for those concerned with the environment and social movements, but also for those interested in public policy and political economy. A fascinating account of a powerful grassroots movement still in progress." Boston Book Review

"Andrew Szasz has written a very strong book of interest both to the academic and to the environmental activist. This is a fine little book that deserves a wide readership." Political Studies

"EcoPopulism is a stimulating book because is assesses the transformation of the environmental movement in recent years and broadens our understanding of social activism." Journal of American History

"Andrew Szasz has provided us a detailed insight of a movement which may very well continue to have a great impact on world politics." Canadian Field-Naturalist

"It is precisely due to the transdisciplinarity of both the toxics movement and Szasz's study of it that the book is appropriate for so many people. EcoPopulism is recommended not only for those concerned with the environment and social movements, but would also be relevant and worthwhile for those interested in media analysis and current events as well as public policy and political economy." Journal of Political Ecology

"The book is a considerable achievement of scholarship and inspiration." Sociology

"In providing a rich review of critical issues, Szasz argues that while policy experts, government officials and industry spokesperson were all trying desperately to find ways to neutralize the now powerful local movements, lawmakers were responding to public concerns by increasing the federal laws governing hazardous waste." Journal of Contingencies and Crisis Management

Moment by moment the evidence mounts that unchecked modern industry is bringing us ever closer to environmental disaster. How can we move away from the brink of extinction, toward a human society the earth can bear? In the thriving popular politics of hazardous waste, Andrew Szasz finds an answer, a scenario for taking the most pressing environmental issues out of the academy and the boardroom and turning them into everyone's business.

This book reconstructs the growth of a powerful movement around the question of toxic waste. Szasz follows the issue as it moves from the world of "official" policymaking in Washington, onto the nation's television screens and into popular consciousness, and then into America's neighborhoods, spurring the formation of thousands of local, community-based groups. He shows how, in less than a decade, a rich infrastructure of more permanent social organizations emerged from this movement, expanding its focus to include issues like municipal waste, military toxics, and pesticides. In the growth of this movement, we witness the birth of a radical environmental populism.

Here Szasz identifies the force that pushed environmental policy away from the traditional approach, pollution removal, toward the superior logic of pollution prevention. He discusses the conflicting official responses to the movement's evolution, revealing that, despite initial resistance, lawmakers eventually sought to appease popular discontent by strengthening toxic waste laws. In its success, Szasz suggests, this movement may even prove to be the vehicle for reinvigorating progressive politics in the United States.

Winner of the 1994-1995 Association for Humanist Sociology Book Award

Andrew Szasz is associate professor of sociology at the University of California, Santa Cruz.